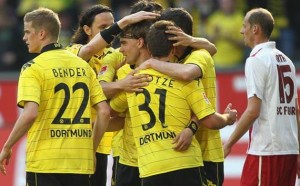 In the UEFA Champions League Round of 16 matches played on Tuesday night, 25 February 2014 we had German side Borussia Dortmund vs Russian outfit Zenit which was an early kickoff, and germans took charge of the game in the opening 5 minutes when they scored twice and put home side under real pressure. Zenit hit back after the break when Oleg Shatov scored in 58th minute to give some sort of hope to Zenit but another goal from polish striker Lewandowski made it 3-1 for away side which killed the tie off.

Zenit scored against to make things interesting but Dortmund kept the lead to two goals and that too with 4 away goals and now Zenit has a mountain to climb in the 2nd leg which will be played in 3 weeks time. Watch full match highlights of this game plus extended video footage which will be available after the match.