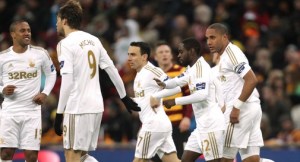 In the premier league game on saturday afternoon, an early kickoff at Upton park saw West ham United take on Swansea City in what was a classic premier league dog fest. Sam Allerdyce side playing at home took the early lead and made it 2-0 before the break but a red card for striker Andy Carroll put hammers in spot of bother but they see through the danger with 10 men against Swansea and got all three points and moved out of the bottom three.

First goal arrived in 27th minute when Kevin Nolan scored to put the home side ahead just before the half hour mark, he made it 2-0 for the hammers just before the break and kind of put the game to bed with a well taken striker. Swansea City came out all guns blazing in the 2nd half and the created a few oppertunities but could not score.