[ BBC Motd video will be available later in the night ] 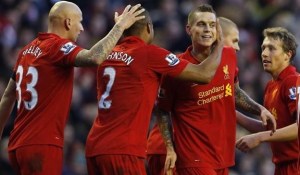 Liverpool went into the game against West Bromwich Albion knowing a win in this fixture will well and truely put them on their way to the top 4 finish and they will be just 4 points behind the league leaders Manchester City who are playing on Monday. It was a important game for Brendan Rodgers side who have been sensational this season, have scored 2nd highest number of goals in the league and their front line is firing on all cylenders.

Sturridge who scored a brace last week, came under criticism after this attitude during him being subbed, but this week he he scored again and gave Liverpool a much needed lead in the first half. Rahim Sterling and Luis Suarez combined well inside the box and Suarez produced a quality little cross at the far post where Sturridge just tapped the ball in and Liverpool 1-0 up before the halftime.

After the break it was usual premier league slugfest, both teams had chances to score but it was West brom who scored through former Everton player Victor Anichebe in 67th minute of the game, We will have the extended match highlights after the game. so keep checking back.