Ronaldo played and won the champions league final last month but he will be playing probably the biggest game for his national side when he takes the field against USA on Sunday night and as the things stand Portugal will go into the game full of team selection problems.

Portugal gave themselves a slim chance to qualify for this group, having got a very unlikely 2-2 draw against United States. Now any of the 2 team from this group can qualify to knockout stages. Portugal need to beat Ghana 4-0 or more and hope that Germany beat USA.

Porgual and USA will get their first taste of playing in the middle of Amazonia jungle when the take on each other for all important group g clash. With a win United States can not only ensure their passage to next round but they can also knockout Portugal from the group stages. Which makes this game a massive one for both sides. Portugal are coming into this game on the back of a 4-0 devastating defeat in their opening fixture against Germany, while USA got their first win against Ghana by a 2-1 scoreline.

Pepe is out with the red card suspension while Fabio Coentrao has been ruled out for the rest of the competition with groin injury and to make matters worse Ronaldo is not 100% fit, infect he is risking his career by keep playing in world cup games if UK media is to be believed.  So portugal coach do have a big team selection dilemma.

United States on the other hand are coming into this game on the back of a moral boosting win over Ghana, Jurgen Klinsmann however has his own selection problems for a striker as the reports suggest that Jozy Altidore is a major doubt for portugal game which leaves them with only option of Aron Johannsson did not impress many in his last outing.

This is how I expect both teams to lineups having read the injury doubts and suspentions. I will updated the page with confirmed lineup 1 hour before kickoff. 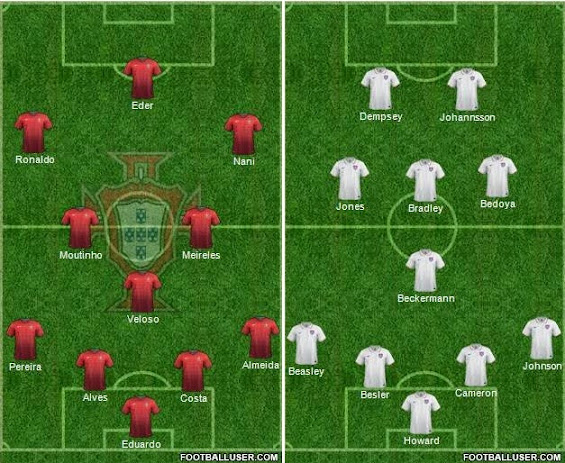 On paper it should be a win for Portugal but if we take worl cup 2014 results as part of predictions we might get another shock with Portugal bowing out of the world cup after just two games. A fit Ronaldo will be the key against USA, I can see goals in this game and I think Portugal will go out there and do the business. 3-2 for Portugal.