The Final Trondheim UEFA Super Cup 2016 match details as worn on the chest for the both teams, The match featured Real Madrid, the winners of the 2015–16 UEFA Champions League, and Sevilla, the winners of the 2015–16 UEFA Europa League. It was played at the Lerkendal Stadion in Trondheim, Norway, on 9 August 2016. Real Madrid won the match 3–2 after extra time. Sevilla FC also have become the first team to lift the trophy five times and will wear a commemorative kit in the UEFA Super Cup to celebrate the accomplishment.The Europa League winners’ patch on the side of the shirt will include the Europa League trophy and the number five. 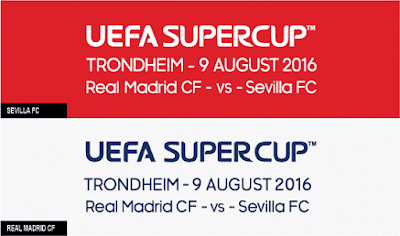