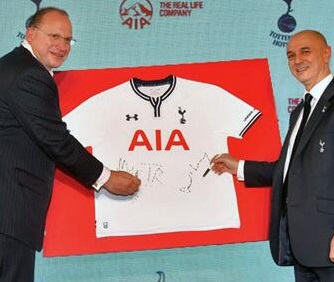 This is a welcome boost in revenue for Spurs who are trying to build a team which will consistantly fight for the top spots in the league. The new contract will start from 2014-15 season and that puts Spurs in no. 5 in terms of biggest shirt sponsorship deals

This new 5 year contract which puts them Spurs in the league of top 3 clubs in England, in-terms of shirt sponsorship deal money. United have the worls most expensive shirt deal coming into play next season with Cheverlot while Liverpool’s deal with Standard Charted is currently at at 20 Million pounds a year which runs out at the end of next year.