Here is the TSMPLUG’s team of the 2014 world cup tournament, Lionel Messi narrowly missed out while Rodriguez, Robben, Muller Kroos and Maschareno all placed in the lineup.

Here is the tsmplug’s team of the tournament from 2014 world cup. We left out Lionel Messi despite the fact that he won the Golden Ball award because he did not influence games in the knockout stages. All his four goals came in the group stages and we believe these eleven players deserved to be in the lineup. 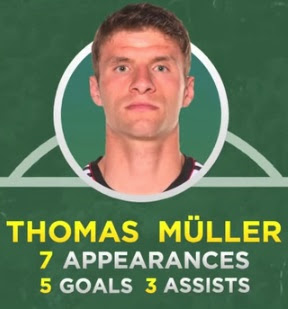 Goalkeeper: Manuel Neuer won the golden glove award guiding his team to world cup success, keeping three 4 clean sheets in 7 matches he played in the world cup finals. His ability to act as a sweeper and pickup precise passes from the back also helped germany great deal.

Defenders: In the defense we have Philip Lahm who is a such a verstile player, can play in midfield as well but his geniun position is full back. He hardly make any mistakes and always perform. Aston Vilal & Dutch defender Ron Vlaar who played a massive role in holland’s great success in the world cup as they only conceded 4 goals in entire tournament and Vlaar helped his team to keep four clean sheets. Mats Hummels played in 6 matches for Germany scored two goals but most importantly helped Germany to keep 4 clean sheets in route to world cup success. Argentina youngster Marcos Rojo played a key role in his team road to final, he started 6 matches kept three clean sheets and it was his attacking play which caught the eye of most people.

Midfielders: Probably the best player in the competition, Javier Mascherano played superbly in the enite competition and provided much needed steel in defence. Germany midfielder Toni Kroos started all 7 of germany games and scored twice against Brazil in semifinal and provided 4 assists overall.

Attakcing Roles: Arjen Robben was virtualy unplayable in the world cup 2014, his pace, trickery caused all sorts of problems whoever played against Holland and his performances made a very average Holland side stand out in the tournament. James Rodriguez scored in every world cup game he played in, scored 6 goals won the golden boot and sealed world record transfer to Real Madrid. What else you can say, he was people choice for the Golden Ball award awell.

Striker: As long as Neymar was fit he had Brazil hopes of winning 6th world cup title, he was named man of the match twice and scored 4 goals before he got injured in quarter finals and missed rest of the competition. Thomas Muller played his 2nd world cup for Germany, scored 5 goals taking his overall world cup tally to 10 goals and helped his team to their 4th world cup title.