Another big game today were Switzerland will need to win this game and hope that Ecuador lose against France in the other game to have any chance of qualification to next round. Honduras of course are playing for pride after losing both of their opening matches. The game will be played in the late kickoff tonight at the same time when France takes on Ecuador.

The match is suppose to be played in Arena da Amazonia in Manuas and that is where Switzerland might struggle having not played outside of europe in the last 3 years. Conditions in Manuas has kind of effected teams like England and Portugal earlier in the group games and this is something Ottmar Hitzfeld’s men has to be vary off.

Steve von Bergen is the only injury worry for swiss side and the change in the starting lineup I can is that of Blerim Dzemaili who scored when he came as a sub in the earlier game. Honduras are likey to make a few changes with Emilio Izaguirre missing out as his fitness is doubtful. This is how I expect both teams to lineup. 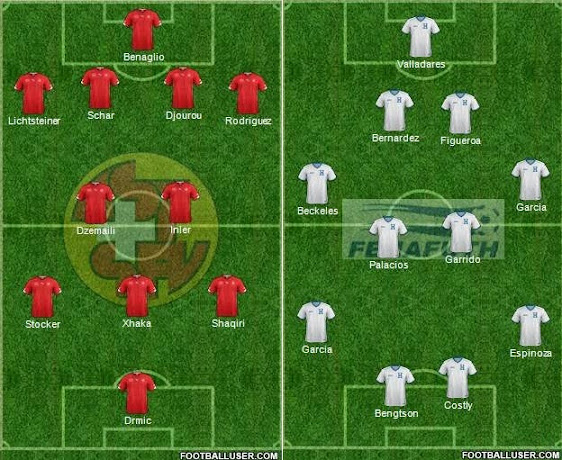 Switzerland should restore order with a win against Honduras and France will beat Ecuador leaving the door open for Swiss side to join them in next round. I can see a boring game this one with Switzerland winning it late in the game 1-0.