Spurs got all three points againsr Swansea City in the league match, Adebayor scored twice, while an own goal gave spurs a good 3-1 away win and put them level on points with Liverpool. 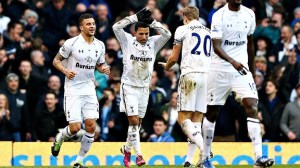 Spurs are now joint 4th in the league with Liverpool after their massive win over Swnansea City playing away from and it was their rejovanated striker Emmanuel Adebayor who scored the first goal in 35 minute to give the away side much needed lead which was doubled after the break with Swansea player put the ball into his own net, it was 2-0 and Spurs were cruising at that point and 3rd goal came through Adebayor who scored in 71st minute to put Spurs 3-0 up. Though Swansea did pulled one goal back and showed some life in the later part of the match but that was not enough.

Yu can watch the full match Highlights here as well as the BBC match of the day video after the game. Spurs next game is a big one for them and they look good team now once the parted company with Andrea Villas Boes.