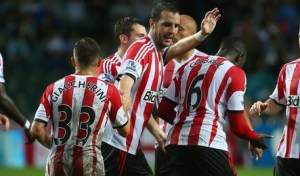 Sunderland took on Southampton in the early kickoff on saturday afternoon in what was promising to be a belter of a game, the away side took control of the game from the early moments and they scored within first 4 minutes when jay Rodriguez scored to make it 1-0 for Southampton, Saints made it 2-0 just at the stroke of half hour when Lovren scored and home fans were furious at the team display.

Though a minute later a goal from Fabio Borini made it 2-1 and a hope for Southampton to made a comeback in the game, game was still at 2-1 for Southampton at half time but in 2nd half Sunderlan turn things aroun and Borini’s goal was disallowed before Adam Johnson scored with a thumping right foot striker in 71st minute, which setup a grand stand finish to the game.