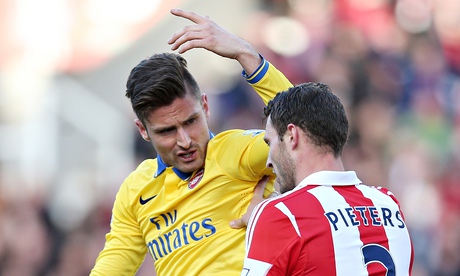 Hands up all those who are looking forward to Stoke City’s “vigorous” defence of the “appalling” Charlie Adam over his alleged stamp onOlivier Giroud.

I do beg your pardon, I have misrepresented Peter Coates there. The Stoke chairman did say the FA’s retrospective charge of violent conduct would be defended vigorously, but he did not use the word appalling in reference to his player. What he thought was appalling was the FA commission raking over these small matters of indiscipline and then picking on Stoke players, when only last month it let off Yaya Touré for a broadly similar offence when the television cameras caught him kicking out at Ricky van Wolfswinkel.

If Coates is of the opinion that there is one rule for the big clubs who happen to be in the Champions League and another for the lesser lights of the division who spend more of their time worrying about relegation, he may well be right. If football is going to have a system of retrospective justice, and most people accept that referees cannot be expected to see everything that goes on, then a high level of consistency is required. It is bad enough when one referee punishes something in a certain way and the next lets the same offence go, though referees acting without the aid of replays in the middle of the pitch will inevitably see things slightly differently to one another and occasionally get things wrong. A three-man panel sitting in judgment on television replays has no such excuse, and should be able to establish a workable tariff to guarantee that offences of similar severity are treated in the same way. So if Coates was aggrieved because Touré got away with a kick while his own player was pulled up, then he has a point. “We have seen some of the things that have gone on in recent weeks and no one has been called to account,” he said. “We feel that this is trial by media. We are disgusted.”

Two wrongs have never made a right, however, and it is tempting to feel Coates is making a stand over the wrong incident. Perhaps also the wrong player. Before the FA’s hearing it would be unwise to spend too long discussing the particular – euphemism alert – “challenge” for which Adam has been charged, though replays are readily available and so are the comments of journalists present at the Stoke v Arsenal game in Sunday’s newspapers. Take a look and make up your own mind. The three former referees on the FA panel formed a unanimous decision that there was a case to answer, taking the view that Adam had deliberately trodden on Giroud’s leg, a suggestion that would not particularly surprise anyone who has seen the Stoke player in action. Though a talented and precise passer and striker of a dead ball, Adam often seems to change into clogs for his defensive duties. And, rather giving the game away, his teammate Steven Nzonzi has come out with a defence of Stoke’s – euphemism alert – physical style.

“Arsenal are a very technical team and when you start kicking them a little bit it gets harder for them,” Nzonzi said. “If they don’t like that we don’t care.”

Yet none of those considerations appeared to bother Coates, who launched his vigorous defence of his team’s late-tackle specialist with the words: “Charlie absolutely assures us it was not intentional. We will defend it vigorously. It is appalling.”

Actually, Mr Coates, it is Stoke’s disciplinary record that is appalling.

As Arsène Wenger mentioned on Saturday, no one in the Premier League has committed more fouls. Taken in isolation, the amount of protection Giroud got from the referee at Stoke was appalling too. Erik Pieters was booked for one overenthusiastic challenge, but Glenn Whelan got away with another and Adam’s contact with the striker’s leg was not even spotted.

Asked to comment on the referee’s performance after the game Wenger maintained a dignified silence. “I have nothing to say on the matter,” he said, possibly afraid of being accused of sour grapes after a defeat, or of reopening the whole can of worms that surrounds Arsenal and their struggles against Stoke since the Aaron Ramsey leg break affair. That alone should have given Coates pause. It was Wenger’s player who could have been injured after all, yet the Arsenal manager appeared content, if not exactly confident, that the FA’s system would allow justice to take its course.

Coates, on the other hand, appears to believe the process of retrospective discipline is flawed. Trial by media is actually an outdated phrase now that there is a mechanism for investigating offences the referee has missed. In the old days when there was no formal system, newspapers and television would make a squawk about perceived injustices until the guilty party at least felt sufficiently vilified, but nowadays it suffices simply to mention that an incident took place behind the referee’s back that the perpetrator could be hearing about later. That’s the modern world, Stoke, please feel free to come and join it. Obviously the system would work better if all the little kicks and niggles were treated the same, but what would really be of benefit would be all the managers, owners and chairmen signing up to the spirit of the thing, and not trying to pretend that their own players are only ever in the dock by accident.

On the subject of finding oneself in the dock, it would be a shame to miss the opportunity of thanking Alan Pardew for another hilarious episode at the weekend. I was in the press seats behind the dugout at St James’ Park when he pushed the linesman a couple of years ago and what people have been saying is correct. Pardew is far too excitable to allow himself to stand anywhere near that close to the action. On the other hand, we moaned about Sven being a sphinx on the touchline, didn’t we? We weren’t very impressed when the wally with the brolly just stood there taking notes in the rain. The game is supposed to be about excitement, passion and entertainment, and I can’t really fault Pardew for having a surfeit of those, especially as he didn’t hurt anyone except himself (and not nearly as much as he might have given that Mike Ashley could easily have taken the opportunity to remove him on the cheap). Pardew enjoys the atmosphere at Newcastle matches, especially on Tyneside, and for that we can forgive him a lot. He does get carried away though, and doubtless needs to be made an example of after his latest indiscretion. People are saying he will have to be banned from the ground or at least the technical area, but that seems a little harsh as well as humourless. For a punishment that fits the crime, how about letting Pardew remain in the technical area for the rest of the season, subject to him agreeing to wear a Hannibal Lecter style straightjacket and mask?