Russians will be taking on South Korea which will be the first game of both sides on 17th june 2013 in the later kickoff starting at 22:00 GMT, the game is going to be played at Arena Pantanal, Cuiaba.

South Korea are playing in their 8th consecutive Fifa world cup, they have played 28 matches in world cups and only won 5, their best performance was in 2002 when they co-hosted the world cup and reached Semifinals. Russia on the other hand are a touch team under Fabio Cappelo, after starting their world cup qualifying campaign with a defeat against northern ireland Russia turned things around and finished at the top of their group. Now they are widely expected to make it out of this group.

Russia captain Roman Shirokov is doubtful for the match as he picked up back injury in the build up to the world cup, Fabio Cappello will be hoping to start the tournament with a win and Russia are expected to atleast round of 16 knock out tie.

Korean team are likely to start with Park Chu-young upfront with Chung-yong, Koo Ja-cheol and Son Heung-min supporting him in 4-2-3-1 formation.

Here is the likely starting lineups of both sides heading in the big game. We will update this page before the kickoff with confirmed lineups. 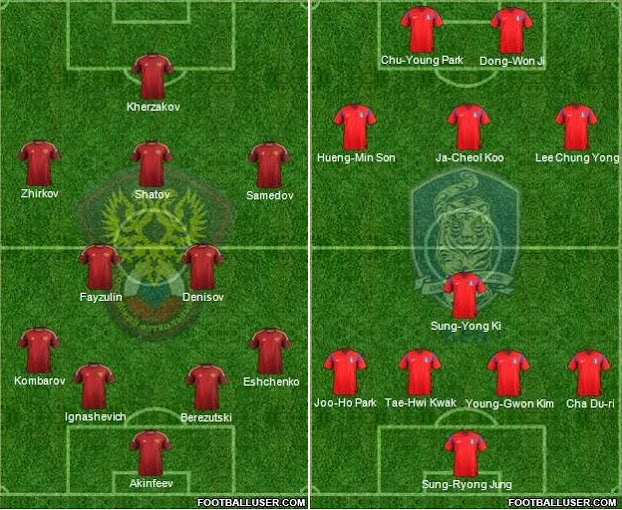 South Korea stuggled in their asian world cup qualifying campaign winning just 4 of the 8 games in last round but some how they still managed to qualify and that because the team is going through a transition period where many experienced players have retired and this Korean side have many youngsters who will be playing their very first world cup. Russia are hot favourites going into the match and in the betting markets they are 13/10 favourites compared to Korea who are 13/5 on odds. join us later in the night for live updates.