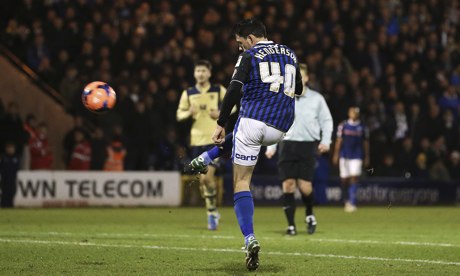 The Rochdale manager, Keith Hill, labelled his side’s win over Leeds as “something special” after the League Two side knocked the 1972 winners out of the FA Cup.

Goals either side of the break from Scott Hogan and Ian Henderson saw Dale claim a 2-0 victory and put themselves into the draw for the fourth round.

Hill’s men started the day 44 places below their opponents in the Football League but they dominated the game against the Championship team, who struggled to break out of second gear. “It was superb to actually get our chance to pit our wits against Leeds at Spotland – but to win the game, that’s something special,” said Hill. “It’s a huge result for the club. We are not a cash-rich club but we are very honest. We are one of very few, like Arsenal, who don’t spend money they haven’t got and don’t have debts.”

A lethargic-looking Leeds barely tested home goalkeeper Josh Lillis, the closest they came to scoring being a first-half header from Matt Smith which Matt Lund cleared off the line.

Hogan netted his 11th goal of the season when he headed home Peter Vincenti’s cross in first-half stoppage time and, after Vincenti had spurned a great chance to wrap up the result, Henderson volleyed home Graham Cummins’s cross in the 83rd minute.

“It’s a tremendous win,” added Hill. “There was a bit of doom and gloom when we drew Torquay away in the first round and there was an expectancy that we’d go out of the competition and get no reward for a game that would cost the club a fortune. But today we got our reward.

“Progressively we got better and better and the way the players executed the gameplan was superb. I don’t think anyone could argue that we deserved to win the game on that performance. Our first goal was worthy of winning the game – it was a superb cross and header. Our second goal was a superb passage of play. We’d missed three gilt-edged chances and I was thinking we’d missed our chance to put Leeds to bed. But eventually we did that.”

The Leeds manager, Brian McDermott, admitted Rochdale deserved to win the tie. “We haven’t lost any points today, which is something, but it doesn’t mean a lot at the moment,” he said.

“Rochdale played some really good football. You always respect the opposition and we showed a lot of respect today because we had to. Keith Hill is a very good manager with a great track record and his teams play great football – when I saw the draw I knew how tough it was going to be. They were good, we didn’t perform – but I will use that as a driver going forward.”