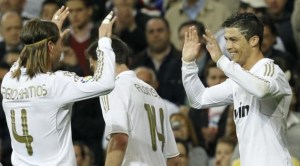 Watch full match extended highlights of Real Madrid 3-0 Celta Vigo 2014 Spanish La Liga match on 6 January 2014. Karim benzema goal video Ronaldo scored 2 goals. Real Madrid started the game pretty strong but failed to take their chances in the opening half. They needed to win this game to keep the pace at the top of the table as both Atletico and Barcelona won their games earlier in the weekend. It took 66 minutes from Real Madrid to open the scoring and it was a scrappy goal from Benzema who slotted home a close range left footed effort straight into the back of the net.

After the first goal their was this calmness in Real Madrid attacking build up and that paid off as Ronald scored twice in the last 10 minutes of the game to give all three points to Real Madrid and he has scored now 21 goals in the league with half part of the season over. You can watch the extended match highlights and goals video here.