English Premier League is finished with its first half of the season and we can analyse some of the new stars in Premier League and thankfully a few good english players have shown glimpses of new era where Roy Hodgson should take a chance on atleast 3 of the following players we are going to discuss. Lets take a look at top 5 most prmosing youngsters in english premier league who are english.

Everton has been a revealation under Roberto Martinez, they are currently 5th in the league and that is down to great performances of Ross Barkley Seamus coleman etc. In Barkley england have one of the best up and coming central midfielder and he himself will be looking to get picked for World Cup by keeping the level of performances he has shown so far in the season. 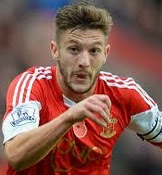 Ravel Morrison has been quite good this season with West ham, probably their only cheering point to date, he is young and the position he plays in is already over crowded with players like him in England setup. But with Theo Walcott injured and probably miss the world cup, Morrison can stake a claim with consistant run of form from now to the day england announce their world cup squad.
———————————————————————————————————————————

At left back position england have quite a few big names and one of them is 18 year old Luke Shaw, he will be a star in the coming years. At the age of just 18 he has established himself as a first team player in Southampton and it wont be long before bigger clubs come calling.

I know he is not young anymore, but has played over 250 games for Villa and has been their best played in the last few season’s and he is also one of the fastest player in the game. Walcott will miss the world cup and Agbonlahor is a natural replacement, with his pace and trickery he can he handfull when coming on as a substitute. Specialy against the teams who are not so established.