The world cup is pulling up strange results, England, Italy and Spain are already out of the competition while Portugal will be playing their last group game with a slim hope of survival in 2014 world cup, On paper all 4 teams has a chance of qualification however Germans and Americans can play out a draw and both will go through. But If Germany beat USA by more than 2 goals and Ghan beat Portugal than it will be ghana who will be going through. Portugal’s goal difference compared to USA is -5 while means they needto win bit and hope germans beat USA with big margin.

We are all set for a grand slam last day of group stages with several round of 16 places up for grabs we are sure to have some roller coaster results. Portugal are expected to make a few changes in the staring lineup which we will discuss below. Ghana on the other hand has a better chance of qualication if they can beat Portugal. All they need is Germans to beat USA in the other match.

Portugese coach beto has many selection worries ahead of Ghana game, Fabio Coentrao is alreayd ruled out which some injury and fitness doubts on reglars like Rui Patricio, Hugo Almeida, Andre Almeida and Helder Postiga might force him to lineup with a very thin and inexperiences lineup. Eder might start upfront with Ronaldo and Nani while William Carvalho can take the midfield role.

Ghana on the other hand has to replace Sulley Muntari who is suspended for Portugal game and This is how I expect both teams to lineup. 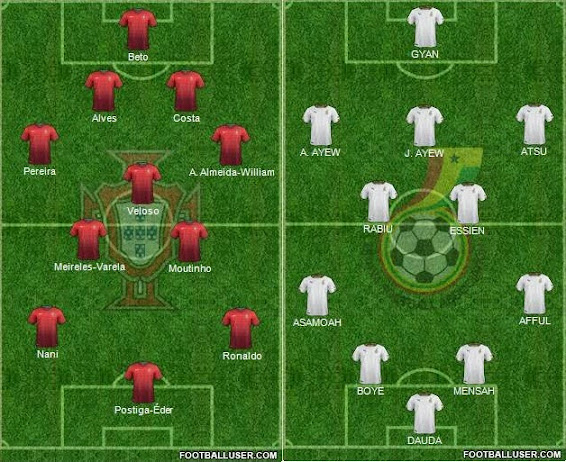 This is the very first time both these teams are going head to head in worl cup and on international stage in general. Portugal has been the biggest disappiontment in the previous few world cups as they have only 1 world cup game in the 9 they have played losing four and drawing four.

Ronaldo has only scored twice from the 62 shots he has taken on goal but Ghana’s shaky defence will provide more oppertunites for Real Madrid hitman. Looking at the stats this looks like a very balanced match where any of the three results are possible.But since both teams need a win and they are sure to play attacking football we will get a high scoring game where I predict Ghana to win by 3-2.