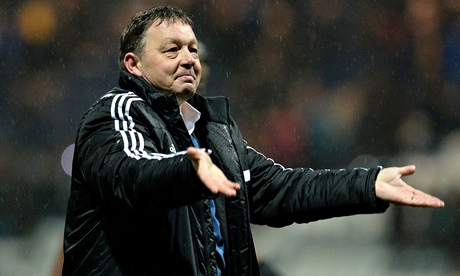 Billy Davies was unhappy that Leicester’s Wes Morgan received only a yellow card instead of being sent off. Photograph: Martin Rickett/PA

The Nottingham Forest manager, Billy Davies, has been given a five-match touchline ban and a £9,000 fine for using abusive language towards a referee.

Davies accepted a Football Association charge of misconduct last week relating to an incident at half-time during the 2-2 draw with Leicester at the City Ground on 19 February, although he denied making contact with the referee Anthony Taylor in the tunnel.

Davies was angry that the Leicester defender Wes Morgan was not sent off for denying a goalscoring opportunity when he fouled Jamie Mackie in the penalty area.

An FA statement read: “Following an Independent Regulatory Commission hearing, Nottingham Forest manager Billy Davies will serve a five-match touchline ban with immediate effect, subject to any appeal, in respect of two breaches of FA Rule E3 that took place during his side’s game against Leicester City on February 19, 2014.

“Davies admitted the first breach that he used abusive and/or insulting words and/or behaviour towards the match referee in or around the tunnel area at half-time of this fixture.

“However, he denied the second breach of improper conduct, which alleged that he deliberately made contact with the match referee. This charge was found proven.