Today Newcastle United’s new puma kit for 2014-15 season has been Released, the new kit comes in a very unique colour and is inspired by 1980′s newcastle kits. The the new away kit will hit the shelves in UK stores on 8th may while you can already pre-order on official newcastle united site.

The new kit comes in beautiful silver colour with a small v shapped colour which has black application. There are very thin vertical stripes along the front of the kit and the controvertial sponsors “Wonga” logo comes in blue/white.

The shorts aof the kit are also in the same colour as the shirt with small black vertical line on the side of shorts. 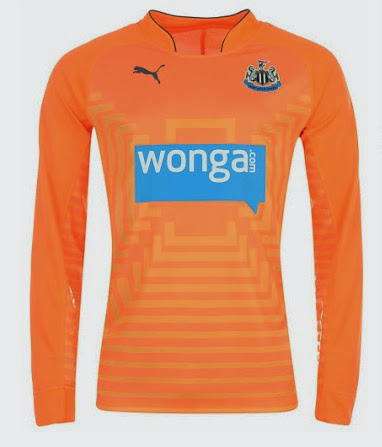 The all new Puma goal keeper kit for Newcastle United also has been released in it comes in orange colour.

Newcastle United will be released their home and third kits before the start of next season and we will be updating this page as soon as any leaks or details has been out.

Check out our main football kits page for all the news and updates on released dates of premier league kits.