Poland failed to qualify for the 2014 World Cup but that does not mean that Nike will let them use the same kit from 2012-13 season, we have a leaked image of propsed Poland Nike Away Kit which feature a totaly new desing and will be releas at the end of February 2014. Poland will play couple of friendly matches with the teams who have qualified for the World Cup so we might see this away kit in aciton pretty soon. 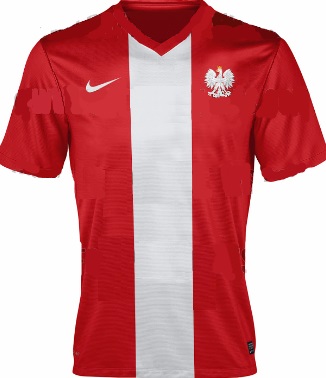 Footyheadlines drafted a mirror image kit, of the new 2014 Poland away kit and here it is.

The new away kit comes in a pretty nice design whith a big vertical line on the middle front of the kit. While the collar is small V neck and we have Nike logo and Polish football logo in white colour.

The shorts will vary for this shirt from match to match, two proposed short colours will be use first is priority white while 2nd one is all red kit from time to time.

Polish home kit for 2014 will feature a similar kit but the main colours will be other way around from away kit. Both kits are expected to be release