Celtic are one of the most successfull scotish team in the country and they will be going into the 2014-15 season as favourites. Celtic’s current kit contract is with Nike and today we can show you the leaked images of Celtic third jersey with a fan mocked up jersey design.

The new kit design is inspired by “tartan” and it is a unique kit which will be used as alternative to home and away kits. The kit pictures were leaked online last night. 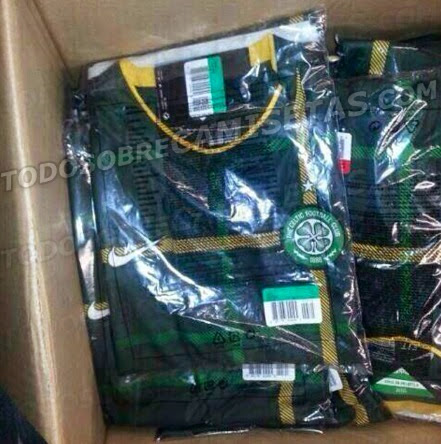 This kit will come in a unque design and below is the mocked up kit design which “Craig Gass” made and uploaded on his twitter account. Its pretty messy design and people on the social media are calling it more of a “tea towel” than the kit. But Celtic fans dont have to worry about as it will only be used asthe third kit and Celtic are suppose to released home and away kits in the coming weeks.