Holland has been the best attacking team in the world cup so far, winning all three of their group games and getting a sweet revenge against World Champions Spain. Mexico on the other hand played three very exciting but hard fought games and they look like a team very hard to beat. This will be the 3rd round of 16 match to be played on 29th June 2014 at Estadio Castelao in Fortaleza kicking off at local time 13:00.

Holland will look at the knockout stage draws and they will feel that they have a massive chance of atleast reaching to semifinals as they will be playing first mexico and if they win this game their next opponent will be either Costa Rica or Greece in the quarter finals and both of these games are pretty much win able for this talented dutch side.

Mexico will have full squad to choose from, they dont have any injury worries or fitness doubts neither do they have any player suspended which pretty much makes it easy to guess what the starting lineup will be. While Dutch team will welcome back Robin Van Persie in the starting lineup with Robben playing alongside hime in a 5-3-2 formation. Snieder, De Guzman and Nigel De Jong are likely to start in midfield while 5 at the back including Blind and Janmaat on the wing back positions

This is how I expect both teams to lineup heading into the crucial knockout tie, and we will confirm the lineups couple of hours before kickoff on sunday. 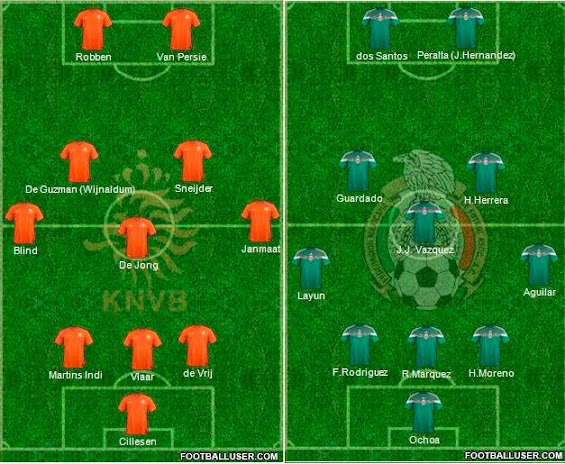 Both teams play with a similar system of 5-3-2 formation and they have had great success with it, It will be interesting to see whether the managers will make any adjustments in this game or they will keep the trusted system. Holland are great going forward while Mexico looks like a solid unit at the back. Mexico will try to sit back and invite Holland on the offences in a hope to catch them on counter attacks.

While Holland do have this deadly counter attacks with Robben running riot once they take the lead, so its very important for Mexico to keep themselves in the game as long as possible and avoid leaking early goals. I am going with a Holland 2-1 win and possible all goals coming in 2nd half.