Both teams have qualified for knockout stages from the Group B but their is still first place up for grab, and finishing first in the group might avoid them a clash against Brazil. Holland have been breath of fresh air, playing with 5-3-2 formation leaving Robben and Van Persie upfront with alot more room to create havoc while Chile played the most compact football in the competition so far.

Both teams exceeded expectations in the group stages so far, with Holland tearing world champions Spain apart with a 5-1 win while Chile put a massive dent on spanish side with a comfortable 2-0 victory which ensured their passage to next round and spains early exit. Holland looked a bit shaky at the back in 3-2 win over Australia while Chile played well to be aussies 2-1 in the opening fixture of the group.

Netherlands are likely to stick with the same lineup and system playing 5 at the back and three in the central roles with Robben and Van Persie playing as out and out strikers. The system has gave Holland much needed protection at the back with sacrificing their attacking flair.

Chile gameplay revolves around Alexies Sanchez who has been playing superbly in the first two matches. Chile’s defence looked much better than of Holland if we compared thier first two games and I can see Chile causing all sorts of problems of netherlands in this game. 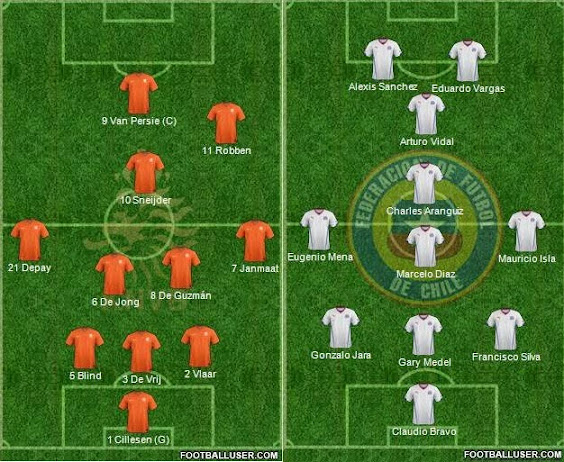 I remember the 2008 Euro championship where Holland started with defeating France and Italy in style and became the hot favourites to win the comptition, they meet Russia in knockout stages and got humbled. So what I am trying to say is Holland tend to start big competitions on fire but there is a reason they have never won a World Cup, because they always come short in the game what matters. In my opinion Holland are the biggest under achievers in the world cups, they had great squads in the past but could not pass that final hurdle.

Chile has all the ingrediants to cause all sorts of problems for Holland back line which looked shaky on both Spain and Australia games, This Holland side will create chances and will score goals but they will most certainly leak goals. I am expected a 2-1 win for Chile in this game.