A knockout tie really, with round of 16 place up for grabs either of these two teams Mexico takes on Croatia in their last group game needing just a point to get through while Croatia needs all three points. A massive game on our hands come monday night and the kickoff will be at the same time with Brazil-Cameroon match.

Mexico played out of their skin to get a point against Brazil and they played superb football to outplay cameroon in the opening fixture giving them 4 points out of first two matches, now all they need is 1 point to get through to the knockout stage while Croatia were unlucky against Brazil having lost 3-1 where couple of major decisions went against them while they outclassed Cameroon in their 2nd group game, they have 3 points and they must win this game to get through to next round.

Croatia are expected to go with the same lineup which took the field against Cameroon, Mario Mandzukic will start upfront having scored two goals after sitting out brazil game.

According to reports Javier Hernandez will start for Mexico upfront, having came on as a sub in the previous two group games. Apart from that we can expect pretty much the same lineups as first two matches.

Its a crucial game with no margin for error for either side and we wont get any surprise in the lineups, below is the expected playing XI which will take the field on Monday in Recife. 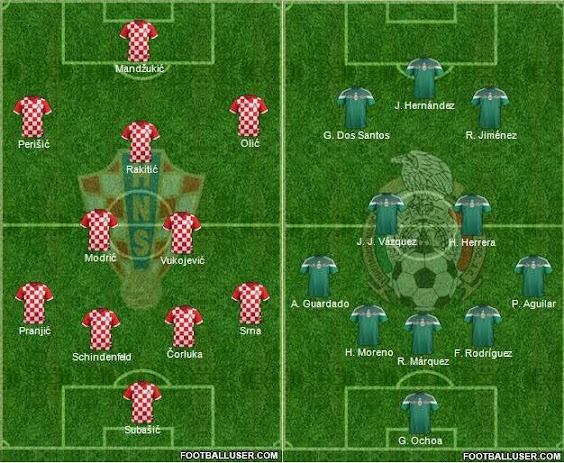 Croatians looked pretty impressive in both games, specialy against Cameroon they were ruthless upfront with Mandzukic starting as a lone striker upfront, Mexico had to dig deep to get a draw against Brazil and although they are playing well as a team they are missing that killer instinct having only scored 1 goal in the competition so far. I am going with a Croatian win which will knockout Mexico with Brazil joining Croatia in the round of 16 from group a.