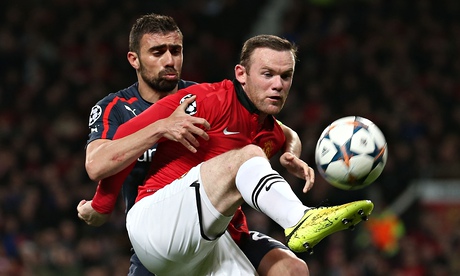 Rafael da Silva 7 Surged upfield repeatedly, even popping up in the opposition goalmouth, and was unusually secure at the back

Wayne Rooney 9 Stood up when it mattered most. Hit the post, created Van Persie’s second goal, won tackles and was involved in everythingMan of the match

Robin van Persie 8 Won and scored a penalty, tapped in a second and completed a hat-trick with a free-kick. Maybe he wants to stay after all?

Leandro Salino 4 Isolated in defence and impotent in attack. Produced little of note until he was booked for kicking the ball away and substituted

Alejandro Domínguez 8 Heartbeat of the Greek side, his clever promptings meant United could never settle completely. Unlucky not to score

Joel Campbell 8 Quick, tricky and with an eye for a pass, the Arsenal loanee was a constant menace but faded in the second half