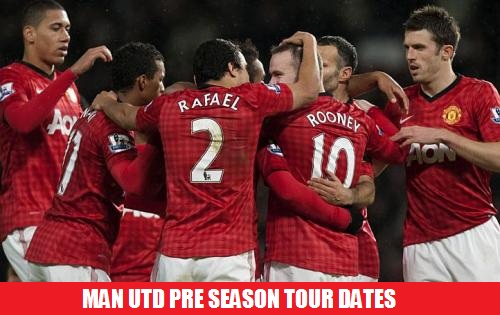 Manchester United are having one of the worst season in premier league since league was reformed back in 1991-92 season, and thats because Sir Alex Ferguson has retired and team is going through a transition period under new boss David Moyes. United are not likely to finish in the top four as they are currently 9 points behin Liverpool with just 13 games to go in the season. But they have already announced their USA Pre Season tough which will be their 5th and first since 2011 when they visit vist USA and played against All Star MLS side and Barcelona.

United have confirmed the US tour, but as the things stand in premier league if they fail to finish in top 4 and get a position in 5th or 6th, their US tour will be very short due to them returning to take part in qualifying round of Europa League. United have however confirmed their participation in “International Champions Cup 2014″ where several European sides are playing. Plus they will take on MLS All Star team and Real Madrid twice. These matches has not been confirmed yet though. Keep checking this page for more updates.

[ Following are the matches and possible dates, we will keep updating as soon as any updates comes around ]