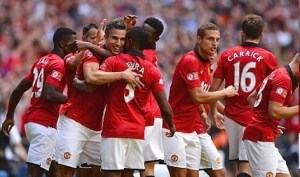 David Moyes and his team were under so much pressure and they need to start winning games consistantly to get into the top 4 which is kind of getting away at the moment because of the kind of Form Manchester United are in. They took on Saturday late kickoff in Premier League against Swansea City for the 2nd week in row, of course they got beaten at home in the 3rd round FA Cup tie last week against the same team and a loss in this game will be a disaster for United who do they fair ? take a look at the extended match highlights.

United took the lead early in the 2nd half, after a very dull first half of the game. The goal came from Antonio Valencia tapped home from close range to finish of a good move, Welbeck scored his 6th goal in as many league matches and stake a claim for the Roy Hodgson’s World Cup squad with Walcott injured. After that it was routine work for United who got home with 3 points and now have 37 on the table and move a step closer to Liverpool who are playing against Stoke on Sunday.