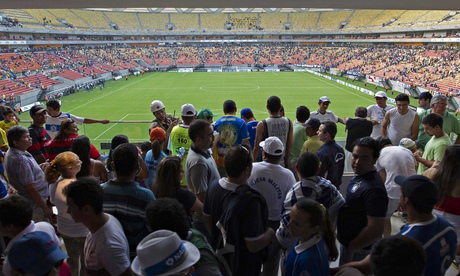 Fans at the inauguration of the Amazônia Arena in Manaus, venue for England’s opening World Cup game of the World Cup where repair work will have to be carried out to the pitch. Photograph: Stringer/Brazil/Reuters

Sections of the pitch at the Amazônia Arena in Manaus, where Englandbegin their 2014 World Cup campaign against Italy, are undergoing emergency repair due to seriously undernourished grass following the excessive use of fertiliser on the new playing surface.

The stadium, which has already staged two domestic games in Brazil in preparation for the World Cup, will host four matches during the tournament but, despite almost near completion structurally, faces a race against time to get its pitch to a high standard before England play the Azzurri on 14 June.

Portugal and the USA will also travel to the Amazon this summer, while Manaus will host matches between Cameroon and Croatia and Switzerland and Honduras during the group stages.

However, despite high rainfall the arena’s pitch faces serious challenges due to the region’s high temperatures and humid conditions. Sections of the surface appear dry while two patches in one of the penalty areas are almost devoid of grass.

The São Paolo-based company who supplied the Bermuda grass for the arena has been called back to restore the damaged areas of the pitch to their former state. Green crystal chemicals have been placed to help alleviate the problem and Jerocilio Silva, state official for the stadium, said: “That’s the treatment for it to blossom again.”

Miguel Capobiango, coordinator of the Brazilian federal government’s World Cup management unit, stated earlier this year that “the [grass] buds have all taken root and have been at match conditions since the end of December”.

Roy Hodgson, the England manager, visited the £173m stadium in February, where a construction worker died last year after falling from the roof, and appeared satisfied with the state of the pitch. However, the surface appears to have deteriorated in places since then, with the pitch based on local soil which is renowned for being acidic and sandy.

The chief of the Amazonian military has admitted the region’s forces will be on a heightened terrorism alert for the games featuring England and the USA. Manaus’s military have 600 armed men available as a contingency force during the tournament, as well as a squadron of specialist reaction troops.

General Ubiratan Poty is confident that Manaus’s infrastructure is at a sufficient level to cope with the influx of supporters, but claimed there will be extra counter-terrorism measures in operation for the games featuring England and the USA.

“[Their presence here] represents a concern for us, because people target those two countries for terrorism actions,” he said. “That is a concern for us. Our national intelligence agency has not yet provided us with the report of the threats, but one way or the other we will have extra attention for those two teams, where they are training. One hour before and three hours after their games all the air space in the region will be closed.”