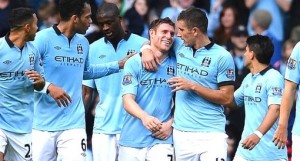 In the FA Cup quater final 2014, Chelsea and Manchester City went head to head 3rd time in this season. Jose Mourinho side won twice in the league but cup tie is a different cup of team as Manuel Pelligrini side will be hoping to keep their run in all competitions going. They had Samir Nasi back in the team after a big injury lay off while youngster Stevan Jovetic was give a rare start by city boss in this FA Cup match.

It took 17 minutes for city to open the scoring and it was Stevan Jovetic who scored to make it 1-0 in homeside favour, while game was at 1-0 mourinho changed a few things around but it was city again who took the league through french international samir nasri who scored in 67th minute of the game to kill the tie off. Now Man City will be playing either Liverpool or Arsenal in the FA Cup semifinals.

FA Cup semifinal ties will be played in March 2014 while the final will take plac in the first week of May. City are now definately favourites to go all the way.