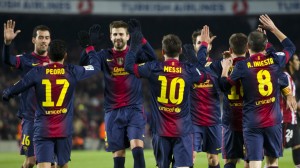 One of the two games played on 18th February 2014 in Champions League first knockout round, Manchester City hosted FC Barcelona in what was promised to be a good competitive game and thats what we got till the end of the first half, City had their chances before the break but it was Barcelona who looked threatning on the ball and created more chances, game was 0-0 at the half-time.

Barcelona kind of upped the tempo after the break and first big incident came when Martin Demichelis got sent off which resulted in a penalty and Lionel Messi scored his first goal in his career on any premier league stadium. THe sending off put city under massive pressure and they melted when Dani Alvez scored his first and Barcelona’s 2nd goal to kill the tie off.

Now Man City need atleast three goals in the 2nd leg to get back into the tie as Barcelona scored two important away goals, realisticly tie is over, Can’t see City doing the mircale in three weeks time in Camp Nou.