Luis Suárez ‘very happy’ at Liverpool with or without Champions League 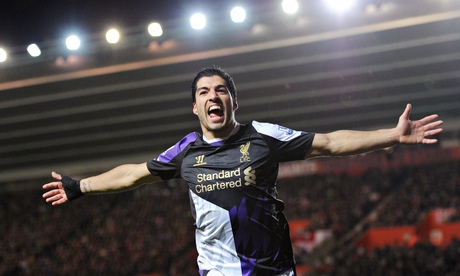 ‘I’d actually prefer not to win this Golden Boot and for Liverpool to qualify for the Champions League,’ says Luis Suárez. Photograph: Tony O’Brien/Action Images

Luis Suárez believes Liverpool are primed to end their four-year wait for Champions League football but he said his future at the Merseyside club does not depend on their qualification for Europe’s elite competition.

Suárez endured a turbulent summer when he made it clear that he wanted to leave Liverpool for a club that played in the Champions League. There was the protracted saga with Arsenal, with Liverpool rejecting two offers from them and making it plain that they would not sell at any price.

Yet Suárez has refocused at Anfield, not only to enjoy what he calls the finest season of his career but to agree to a new long-term contract last December. He scored his 24th goal of the season in Saturday’s 3-0 win at Southampton and he has been a driving force in Liverpool’s push for a top-four finish. They sit second in the table, only four points off the leaders, Chelsea.

“I’d actually prefer not to win this Golden Boot and for Liverpool to qualify for the Champions League this season,” Suárez said, in an interview with FourFourTwo magazine. “Any player would miss the Champions League. We’ve not been good enough since I’ve been here to qualify, but this could definitely be our year”.

“It would be a frustration not to get fourth because we’ve done everything possible and given our maximum to qualify. Everyone says Champions League nights at Anfield are amazing – memories you guard forever. It would be an unforgettable experience and it’s been too long since that happened. I think to finish in the top three, which is still possible, would be incredible with the players we have in the squad.”

Suárez was asked whether he would stay at Liverpool if they fell short of the Champions League. “I think so,” he said. “I signed my new contract because I’m very happy here and I want to stay where I’m enjoying football and life. Playing in the Champions League isn’t dependent on that.”

He added: “This is my best season yet. I feel in a very good place, physically and mentally. Every day, I feel better in this club. I hope to continue down this path because we want Champions League football for Liverpool and, personally speaking, I want to continue that mentality throughout the World Cup with Uruguay.”