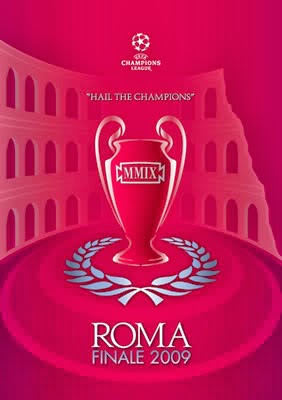 Visual identity 2009 UEFA Champions League final in Rome, a design that combines today’s competition trophy with the ancient Roman symbol of victory, a laurel wreath and it incorporated several typically Roman images; the logo was centred around an outline of the European Champion Clubs’ Cup, upon which was written “MMIX” – “2009” in Roman numerals; around the base of the trophy was a stylised laurel wreath, and in the background was a simplified image of the interior of the Colosseum. The entire theme was based on a colour scheme of deep red and silver-white.

Radiant, London-based graphic design and branding agency to produced these concept.  An alternative logo consisting of the UEFA Champions League logo surrounded by a laurel wreath was also released. 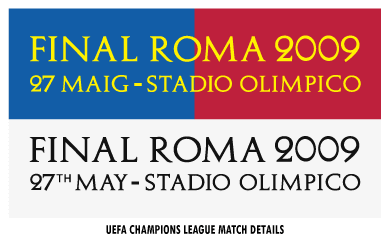 Aditional match details was worn on the chest on each finalist team shirts, FC Barcelona and Manchester United.