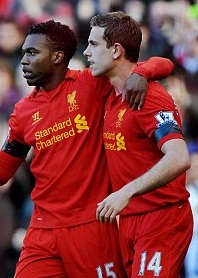 Liverpool are playing some solid football this season and looks like they will challenge for the 2nd and 3rd spot in the league with the kind of form they are in, they took on Swansea City in the premier league game on Sunday afternoon at anfield and took early lead through sturridge who scored in just 3rd minute of the kickoff and continued his recent run of form with hom scoring in 8th consecutive league game.

Jordan Henderson scored 2nd for liveprool before Swansea city mounted a comeback, former liverpool player Shelvey managed to get one back for the walesh side while bony made it 2-2, they sturridge scored against to get liverpool in the lead before the break. Swansea got to level terms 2nd time in the match when bony converted a penalty and made it 3-3 on the day.

Game was looking like going for a high scoring draw but this liverpool side is resiliant and can play good football for 9o minutes that what we noticed in their injury time winning game against Fulham, and against Swansea they upped the temp in the last 10 minutes and it was Henderson who scored the winning goal this time around, liveprool’s 4th and his 2nd of the day.