To completed the League patch collection, Italian Serie A and B Lega Calcio league patch.1997-98Through the 1997-98 season, Lega Calcio patch is very similar to that of the previous season but the major differences, the absence of text written from 1946 to 1996 and the black edge of the patch. Additional for these patches and ‘important to point out that being machine-embroidered on cloth can vary in small details in the same embroidery. 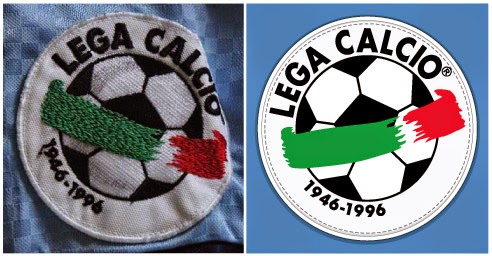 1996-97Start from the 1996/97 season for the first time in the Italian leagues from Series A and B, the team using the league patch. It was a patch of cloth round in shape with embroidered logo of the national insignia colour shape and the words “Lega Calcio” (Football League) with marked “1946-1996” that is the anniversary of the birth of the League itself. The patches were usually sewn (by hand or machine) on the shirts.