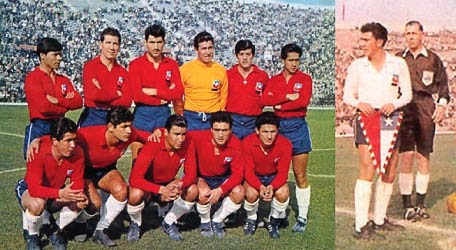 The hosts nation, Chilean National Team did its best performance in the history of their participation in the World Cup, where he finished with a respectable third place.
Playing group 2, won Italy and Switzerland and lost to West Germany. Passed by the Soviet Union in quarterfinals and lost to Brazil in the semifinals before defeating Yugoslavia 1-0 and stay in third place.

The Chilean national team played with a black stripe down its crest, out of respect to the victims of an earthquake that devastated the nation just before the World Cup started.