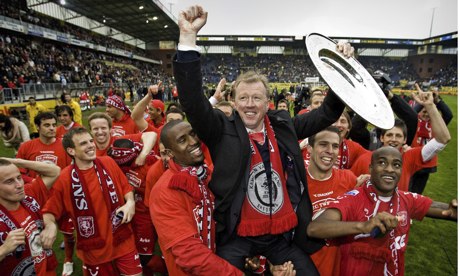 José Mourinho believes more English managers should follow Steve McClaren‘s lead and manage abroad. Mourinho, whose Chelsea side visit McClaren’s Derby County in the third round of the FA Cup on Sunday afternoon, described working in another country as a “fantastic experience” and said the former England manager has benefited from spells in Holland and Germany.

McClaren suffered a blow to his reputation when England failed to qualify for Euro 2008 and he has not managed in the Premier League since leaving Middlesbrough to take the national job in 2006. Instead, after being sacked by England, he joined FC Twente in 2008 and won the club’s first league title in his second season in Holland. McClaren then had brief and unsuccessful spells at Wolfsburg, where he became the first Englishman to manage in Germany, and Nottingham Forest.

After a second spell at Twente last season, McClaren joined Harry Redknapp’s coaching staff at Queens Park Rangers, before replacing Nigel Clough at Derby in September. Mourinho is impressed with the way the 52-year-old dealt with his England experience.

“I think Steve is a very intelligent guy,” the Chelsea manager said. “I think he moved on, went to Holland, Germany, new cultures and new football. To go abroad is a fantastic experience and sometimes it looks like English players and managers don’t like to go abroad. He had that experience, for sure it was a great one as it was completely different cultures to England in terms of football. He came back with a little Harry in QPR and now Derby.”

“But I think if there are no jobs in the country as a manager or a player, then you have to go. This is a short professional life so go and enjoy, and you always have the chance to come back as a manager and a player. People shouldn’t be afraid to be a bit adventurous like other nationalities are. Football is the same everywhere. Eleven against 11, one ball, two goals.”

McClaren has led Derby to fourth in the Championship, three points off the automatic promotion places, and it is perhaps a surprise that he has not been offered another chance in the Premier League. But Mourinho said managing in the Championship has its perks.

Mourinho clearly rates McClaren, which is why the young Chelsea striker Patrick Bamford joined Derby on loan for the rest of the season on Friday.