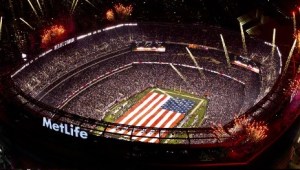 Super Bowl 2014 is fast appreaching and we are already starting to feel the heat and that crazy atmosphere of BBQ and beer in United States is trademark preparations for the Super bowl 2014. But what about the americans living abroad, who are working on the day of Super bowl or the foreign fans of american football ? where and how can they watch super bowl 2014 live online ? So we decided to come up with a informative post which will guide your through how to watch Super Bowl 2014 in European countries, tv channels, pubs and bars etc. So lets get the ball rolling with date time and schedule of super bowl.

Now lets take a look at some of the ways you can enjoy the live action from Super bowl 2014 on TV, online or in bubs and clubs around europe.

In Uk SkySports will start its coverage at around 11:30 GMT while in Germany, Italy and spain coverage will begin after midnight (00:00) for the list of channels please take a look below.

Most of the european countries show NFL Super Bowl live and free apart from the usual pre game shows and stuff. But you will get the game live on many euro countries.