Holland started the game with 4-3-3 formation instead of their highly successfull 5-3-2 system which Van Gaal used in the previoused games. Dirk Kuyt was played at the left back position but an early injury to Nigel De Jong lead Van Gaal to make early change as De Jong was replaced by Martins Indi.

But as the world cup has already seen that these Latin American and North American teams has much more energy than their european counter parts and that was the key in this game as well. Mexico closed down spaces for Robben and Van Persie and hit them on counter attacks throughout the game. 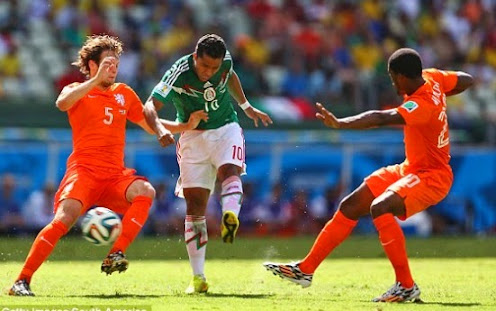 Dos Santos struck a neat half volley from good 25 yards from goal, which ended up back in the net.

The match was 0-0 at the break and Holland was slightly the better side in terms of attacking play but Mexico hold out pretty well in general. Immedialty after the halftime Mexico took the lead with a superbly taken goal by Dos Santos who control the ball perfectly on his chest before launching a superb strike in the back of the net for 25 yards, a bit like James Rodriguez goal yesterday.