One of the best games in the world cup so far, a pure attacking football with both teams going at it, Robben open the scoring, Cahill wonder goal, aussies lead briefly and than dutch turn around. the game had everthing. Watch highlights here

Holland were expected to make life very difficult for Australia, who struggled in their first game against Chile but the game was anything but the walkover. Robben opened the scoring with typical running at the defence and unleashing a low left footed shot, Cahill scored probably the best goal so far and he ever surprised himself.

The game came into life even more after break when Australia took the lead but it was turned around when Holland scored two quick goals.

Holland inflicted the biggest defeat for defending champions spain since 1950 world cup, widely regarded as the greatest national team in the history Spanish team came into the 2014 world cup on the back of winning three back to back major trophies on international lever, 2008 European Championship, 2010 World Cup and again the 2012 Euro. Holland on the other hand suffered the heartbeak of losing in the final of 2010 world cup four years ago in the hands of spain but they made it for it in their opening game when Van Persie and Robben ran riot and leading holland to a massive 5-1 win and it could have been ever more.

Now all Holland need is 1 win in the remaing two games, they will be playing against Australia on Wednesday, 18th June 2014 and a win in this game will virtualy confirm their place in knockout stages. We take a look at both teams team news and expected lineup.

Holland are likely to go with the same starting line and system which saw them successful negotiate a win against spain. Robben to start alongside Van Persie while Nigel De Jong to partner Wesley Snieder and Janmaat in the central midfield roles.

I expect Ben Halloran to start replacing Tommy Oar in the midfield apart from that we can expect more a less same team which lost against Chile 3-1.

Possible Starting Lineups of Both Teams:

Expect both teams to play with the same systems and players as in their last group games. 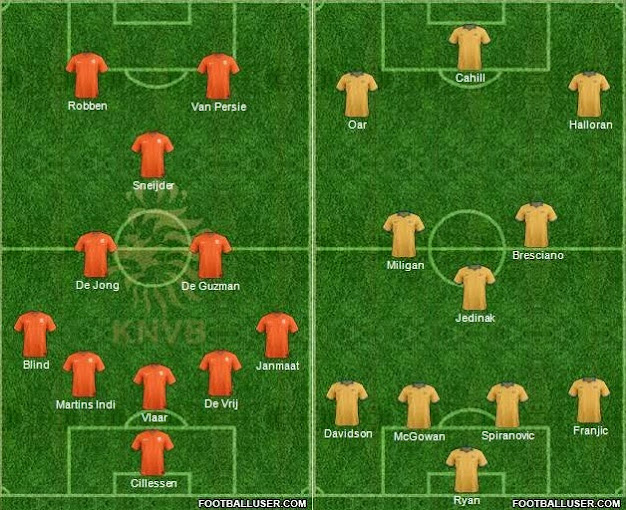 Well Holland went into the world cup as underdogs and not many people game them a chance, now after beating Spain the odds on Holland going all the way has seen a dramatic turn. On paper Holland should win this game easily, as Australia dont pose any threat going forward apart from Tim Cahill who can get an odd goal with his incredible ability to score headers. Chile outplayed Australia in the first game and I can see the same pattern against Holland. Its 3-0 Holland for me.