Two of the defeated teams in the opening Group C matches, Greece and Japan will take on each other in a bid to keep hopes of qualification to knockout stages alive when they meet on Thursday night. The game will be the third game on 19th june kicking off at 19:00 Local time (22:00 GMT)

Japan looked a strong unit in the first half against Ivory coast the other day and they scored to put the african nation under pressure but all their gameplan went out of the window when Didier Drogba took the field. They lost 2-1 having lead 1-0 at the break and now this game is a very important affair and a defeat against Greece all but end their chances of qualifcation to next round.

Japan coah Alberto Zaccheroni will have to get his tactics spot on againt Greece as there is no margin for error anymore.Japan likes to play free flowing attacking football and they do have goals and I expect them to go with same lineup.

Greece tend to site back and wait for their opponents to make mistake but once they go behind they dont seem to have that “Plan B” to get back into the match. 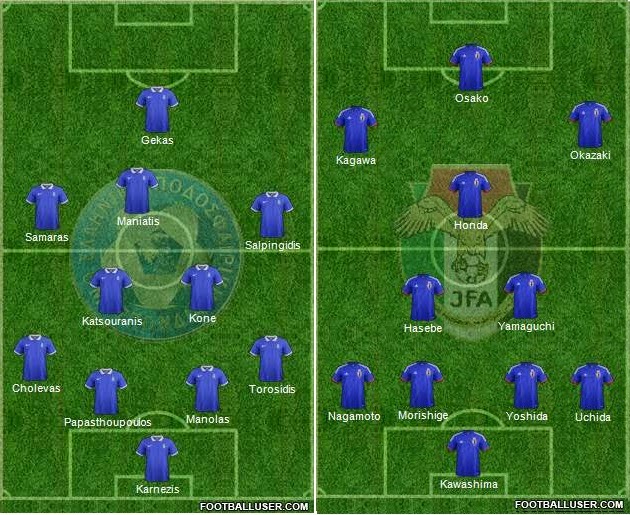 Japan should go in with the same lineup against Greece

Japenese team looked pretty solid going forward aganist Ivory Coast and they should have kill the game off once they took the early lead, but they were punished for their missed chances as Ivory Coast mounted a comeback where they scored 2 goals in 2 minutes. Japan midfield is quite light weight and that is where they have to work on, United player Kagawa was perticularly poor against Ivory Coast.

Greece are one of the most defensive units in this world cup and they bank on their collective ability to defend as as a team. But they just can’t seem to get things right once they go behind. This world cup has seen attacking teams getting the better of more defensive sides and I expect the same with Japan to win this game by 2-1.