Both teams have a chance to qualify to the next round when they take the field in today Group C game, Greece must win this game and hope Colombia beat Japan while Ivory Cost can make it to the next round with even a draw. Both group c games will be kicking off at the same time at 21:00 UK time.

Greece are coming into this match on the back of 0-0 draw against Japan which they earned having played most of the match with 10 men, Ivory Coast on the other hand got defeated against Colombia who qualified to next round first in the group. This is kind of a knockout tie and the winner is most likely to join Colombia in next round.

Greece captain Konstantinos Katsouranis is suspended for this match and he will be replaced by another vatern, while Ivory Coast is likely to start with Drogba and Wilfired Bony upfront.

Ivory Coast are likely to name an unchanged side who played against Colombia, but I would like to see Drogba starting alongside Bony in the starting lineup. 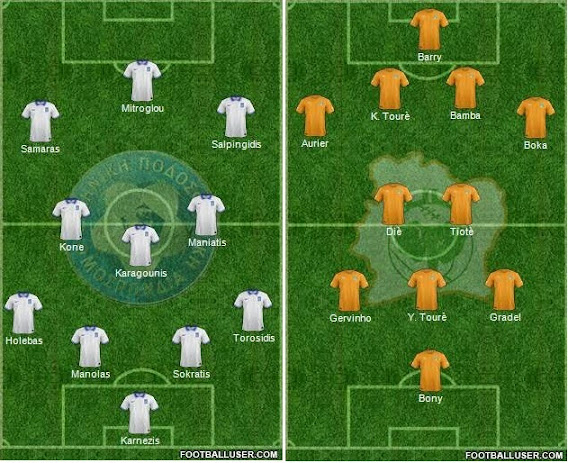 Greece are finding it incredibly difficult to get goals in 2014 world cups and although they defended extremly well against Japan after going down to 10 men, I can not see them been able to contail Ivory Coast forward line. I see goals in this game partly because Greece finaly have to come out and try to win the game which will give Ivory Coast much needed oppertunities on the counter. I expect Drogba and co to do the business in win this game 2-1.