The last big game in the 2014 world cup group stages will see USA takes on Germany in what is a very important game for both sides. Germany are sure to qualify for next round given they don’t lose with hockey score while USA need atleast a draw if portugal or ghana win their game. Its all setup for a blockbuster night of football and of course USA will take heart from their june 2013 display against Germany which they won 4-3.

Many people expect Germany and USA to play out a draw which will favour both sides as Germany will finish top of the group while USA will qualify as runnerups regardless of the results in other game. But Jurgen Klinsmann has came out and said that they will go for a win and he is sure that Germany will do the same. After three high profile exits from the tournament already Germans are favourites to go all the way alongside Brazil to win the competition. below is the short preview and statistics ahead of the game.

Possible Starting Lineups of Both Sides:

Miroslov Klose came out as a sub to score the equaliser against Ghana in their 2nd group game and he is likely to start upfront as Germany are well placed to qualify even if they lost (not with big margin though). This is how I expect both teams to lineups heading into the last group game. 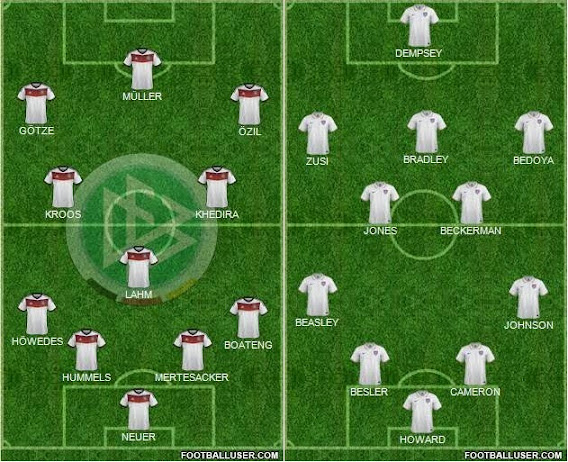 Idealy both teams will be happy with a draw but Germany might give it a right go knowing their goal difference is good enough to take them to next round, but USA will be alot more conservative in their attacking approach. I think Germany will win this win with a narrow margin and that should be enough for USA to get through as I also Predict Portugal to register their first win against Ghana.