The sixth round of 16 tie will be between Germans and Algeria which will be played on Monday night 30 June 2014 at Estadio Beira stadium in Porto Alegre. The winner of this game will be playing against France or Nigeria in the quarter finals and here is a short preview of the match and live streaming links will be available 1 hour before kickoff which is at 17:00 Uk time.

Germans played through yet another efficient group stages in the world cups, defeating Portugal 3-0, than played out a 2-2 draw against Ghana and finaly 1-0 win against USA ensured their passage to next round as group winners. Algeria on the other hand had to do it the hard way as their qualification chances were in balance going into the match against Russia and they needed atleast a point of this game which they did by coming from behind and equalising in 2nd half.

Germans are likely to stick with the trusted 4-3-2-1 formation with Thomas mullar playing upfront, Mirslov Klose is expected to be on the bench but will play some part in the second half. Mario Gotze might be replaced with Podolski in the starting lineup.

Algeria on the other hand have achieved the target what they set before the world cup which was to reach atleast first knockout stage and now the pressure should be off as they have nothing to lose, which should help them perform better against Germans. 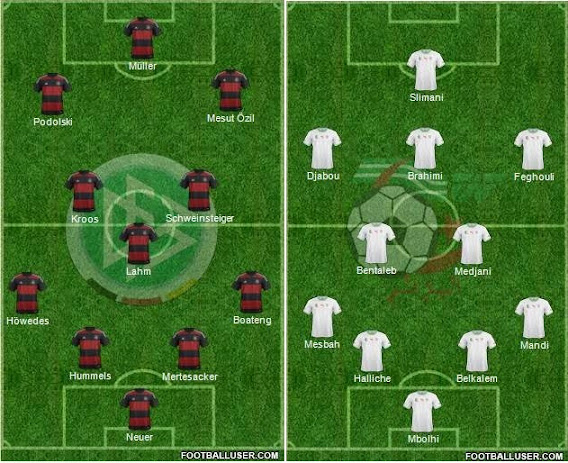 Live streaming links for this match will be available 1 hour before kickoff, we will place stream with Itv coverage in english commentary and one alternative stream in german commentary.

Match Predictions:
Germans should win this game all day long on paper, but Algeria turned out to be quite a team. They have players with pace and power upfront who can cause problems to Per Mertsacker and Hummels at the back but if Germany bring their A game in this match they should have enough Arsenal to win the game easily.

No disrespect to Algeria but I am going with a easy German win in this one. What you think of this matchup ? can the surprising results keep coming ? or the favourites will finaly start to get the better of underdogs