Andre Schurrle scored the only goal of the game for Germany which came in the first half of extra time as Algeria took 3 time world champions all the way and made them work really hard for this win. 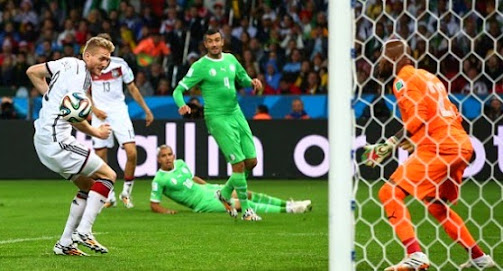 Andre Schurrle scored the only goal of the game.

German were heavy favourites odds on in the round of 16 clash against Algeria, but boy did they had to work hard for this game as Algerian side took the game to them and looked the better side in the opening exchanged. Germans had more of the ball in the first half but their movement in the final third was poor and it was Algeria who created couple of good openings.

After the break Germans tried to play with the high defense line in a hope to sqeeze out Algeria and get that all important goal, but african side held their own and held germans to a 0-0 normal time and took the game to extra time. We did had some good openings but both teams final ball was poor.

Once the extra time started Germans were favourites to win this and they scored through Andre Schurrle, who is making a habbit of scoring important goals since last season with Chelsea. The finished was absolute of a peach, he flicked the ball which was slightly behind him