Was part of Klinsman assistan team and took over as the national team coach 2 years later, he has developed a typical german style of play, a free flowing football, high pressure with a 4-2-3-1 formation. This german side is very talented and under Low they might go all the way. 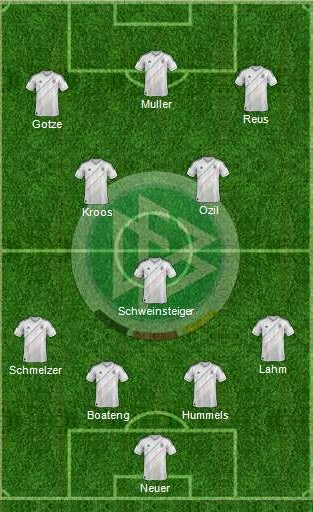 Joachim Low has quality players for every position, likely starting lineup will have quite Bayern Munich touch, with Kroos and Bastian Schweinsteiger will start in the middle of the park as Sami Khadira might not be fit for the world cup. While three man attacking midfield with Muller, Ozil and Reus will be supporting a lone striker uptop in either Gomez or Kruze.

Ozil has the ability to dictate the play with his precise passing while Reus is having a superb season with Borussia Dortmund and in form player will be key to Germany chances.

Youngster to watch out for: Toni Kroos

He already have 40 caps under his belt and at the age of just 23 he might turn out to be a superb player for both Germany and later for Bayern Munich. Kroos has the vision, passing ability and a engine which can work box to box.

Germany squad for the world cup final will be announced before 13 May 2014 and we will updated the final list of 23-man squad right here. Below is the list of players who are likely to be with the German side but its not a confirmed squad.