Germans outplayed, out thought and put a real beating on Portugal as they won their first game of 2014 world cup by 4-0 where Thomas Muller scored the first hattrick of this world cup, Portugal went down to 10 men with pepe doing his usual antiques but the damage was already done

Germany secured a massive win over Portugal in the world cup Group G game on monday event, they not only scored 4 goals but also put a real dent on Portugal’s confidence. Pepe saw red card but the real damage had already been done when Germany took the lead in 12th minute of the game through Thomas Muller penalty.

Finaly Ronaldo will grace world cup 2014 as Portugal takes on Germany in the Group G game on monday a match to be played at “Arena Fonte Nova” in El Salvador at 17:00 Uktime (13:00 Local). This is a huge game in the group as it might have a bir impact on one of these teams might not making it through the group stages. Joachim Low, the german coach has a few selection headechs forced by injuries to player and you can read more about lineups below.

Here are the strongest lineups for both sides, but Germany do have selection problems, Joachim Low might start Philip Lahm in the midfield, a position he has taken on superbly with his club side. Boeteng might start as full back with Hummels and Mertasacker playing in central defence. Klose, Muller, Podolski and Ozi will start in front four with Schwanstieger partnering Kroos in midfield.

Portugal on the other hand will use Ronaldo as out and out centre forward, Danny, Varela and Josue playing just behind him in attacking midfield roles. 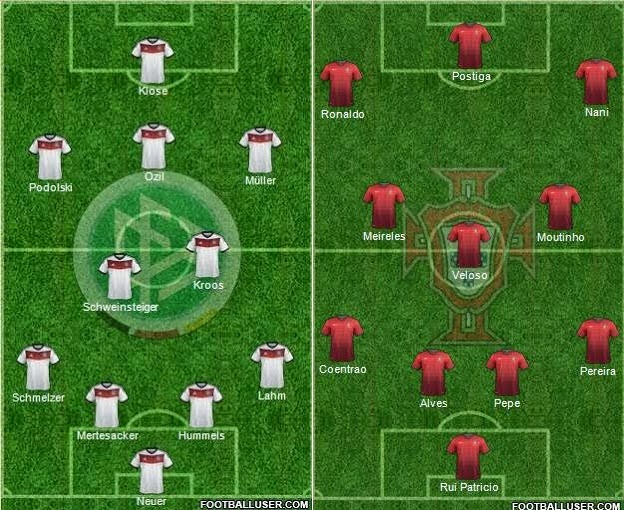 A tough game to predict really, Cristiano Ronaldo takes Portugal to totaly different level when he is fit and playing at the top of his game. I strongly believe that if Ronaldo is fit and has that Real Madrid goal scoring form, Portugal can go far in this competition. Apart from Ronaldo portugal have some quality players as well while Germans are always great starters in world cup competition, though this side is not as good as people are rating them.

Germany has a quality squad and but they dont have that magical player who can turn things around when going gets tought. Mesut Ozil is their key man and they need him to be on a much better form which he showed Arsenal colours. I sittng on the fence in this one and we might have this rare draw in 2014 world cup eventhough we have seen some quality attacking football in first three days with loads of goal not a single draw in first 8 matches.