[ FIFA has announced the final 26 referee’s for the 2014 World Cup Finals. The will accompany by two assistant refs each so in total we have 78 names who will be going to officiat world cup matches. Each of 26 referee’s will be given a lump sump payment of $50,000 to be part of referee roster in world cup. ] 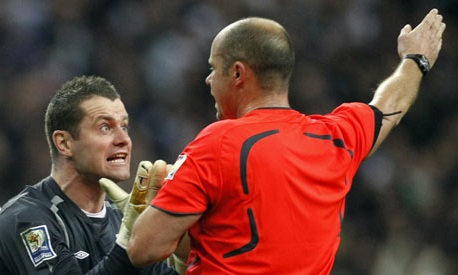 So 32 teams know they are going to FIFA world Cup 2014 while 22 teams are in the line for playoff where 11 more will join the already qualified 21 teams in the World Cup, but what about the Referees ? FIFA announced a provisional list of around 60 referees from different parts of the world back in April 2012 which will be considered for FIFA World Cup, the list was reduced to 38 in September 2012 and now after the playoff matches are finished FIFA Will released the last squad of refree’s who will be officiating the World Cup matches.

FIFA Will announce the names in early 2014 while all assistant refree’s will also be decided at the same time. All the selected refree’s get a fixed payment for whole World Cup, like back in 2006 in Germany every referee got a lump sump payment fo $23,000 while it is expected that in 2014 the payment will be increased to $50,000 to be part of Refree’s team in World Cup.