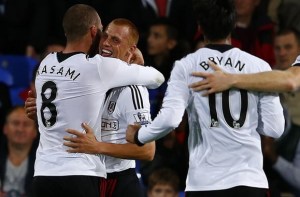 Fulham took on Norwich City in the FA Cup match on 14 January 2014 and playing at home they were the favourite side going into the game. After a few very dispointing results in the league Cottagers really needed this win. Fulham opened the scoring in 16th minute of the game through Darren Bent who scored a good goal to make it 1-0 and ease the tension of Fulham manager and players.

Ashakan Dejagah made it 2-0 before the break and at that point tie was effectivly over, Norwich however produced a few good chances in the 2nd half before former Chelsea/Villa player Steven Sidwell made it 3-0 and put the result beyon Norwich City. Fulham now are in the 4th round and they matches will be played in couple of weeks time. You can watch the goals video and full match Highlights here after the match while extended match footage will be available later.