Live Streaming: We will place the live streams 1 hour before kickoff which will be around at 17:00 BST and links will be up 1 hour before that ar 16:00 BST. So check back around the time the game starts. Untill below is the short match preview.

France made it to the 2014 world cup knockout stages with impressive three group games where they were victorios twice and drew a 0-0 game against Ecuador. Nigeria on the other hand won once, draw and lost once on their way to next round of 2014 world cup. Now these teams will be battling it out for the place in quarter final where they will face either Germany or Algeria. The match will be played on monday, 30th June 2014 at Estadio Nacional in Brasilia and the kickoff time is 13:00 Local.

France will go into the game as hot favourites having started the tournament on fire, before the world cup started expert did not give them much of chance but they changed their system to a more fluid 4-3-3 and now they looks like a good attacking and free flowing team who create alot of chances. They are like to go with Benzema and Giroud upfront and Mathieu Valbuena playing as attacking player on the right side.

Nigeria on the other hand has pace and they are very solid unit and hard to beat. They have two quality strikers upfront with Odemwingie and Emenike while Obi Mikel will be pulling the strings from midfield.

It will be 4-3-3 formation for France with either Giroud or Antoine Griezmann playing on the left while Nigeria are likely to stick with their 4-5-1 formation with Odemwingie playing just behind Emenike. 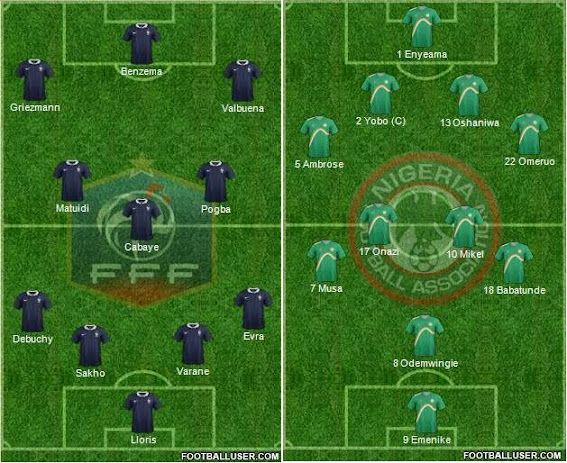 I have to be honest here, after watching Nigeria 0-0 Iran draw I thought the way they approached that game it was disgrace. But they did turned things around against Bonsia getting a massive 1-0 win and than cause all sorts of problems for Argentina. They have loads of pace upfront and some good solid defenders at the back and I can see them putting France under pressure.

France have played three games and first two were great performances, although in the Honduras game they were playing against 10 men for most of the match, while they tore Switzerland apart in the other game with a 5-2 win and than this 0-0 draw against Ecudor where lack of width on the wings was cause of concern.

They dont have that Natural winger in their lineup and against Ecuador they were playing so narrow that it became easier for Ecuador to defend. They need to move to ball quicker stretch Nigerian defence to have some success. But if they played they way they did against Ecuador I can see Nigeria making problems for them. However I am going with France to get out of this tricky tie possibly on extra time or penalties.