Ecuador will go into the france match with the goal difference of 0, as they have scored 3 goals and conceded three with three points on the table they must win this game to keep their hopes of qualifying to next round in their own hands. Switzerland’s goal difference is -2 and they have three points as well, leaving them to must win against Honduras and hope Ecuador lose against France.

This is a big one for the south american side Ecuador who has a good chance or making it through to the next round if they managed to beat France. Three points in this game will surely book their place in the knockouts regardless of the results in other Group E match. France has already book their place in next round and they are likely to go through as group winners with a superior goal difference even if they lost against ecudor (by not more than 2 goals).

Yohan Cabaye is suspended for france while Laurent Koscielny might replace Mamadou Sakho in central defence as Sakho is in fitness doubt. While I expect Ecuador to make only 1 change with Carlos Gruezo coming in for Oswaldo Minda. 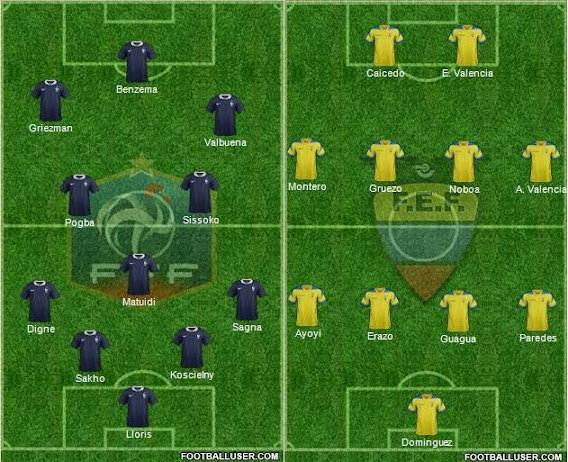 France has played superbly in the first two games and they are considered as dark horses for the competition as other big teams have already knocked out. Confidence is flowing all around for France and I expect them to win this game with another staller performance. Its 2-1 France for me.