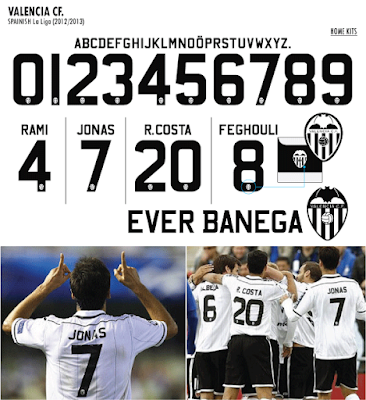 As the requested the completed Valencia 2012-13 team players font. Valencia CF home shirt is mainly white with light grey pinstripes. It has a white collar with black trim whilst there is black piping around the sleeve ends. Made by Joma and was officially unveiled by Valencia on May 18, 2012. Jinko Solar are the main sponsors. New PU type Font style was introduce with the club team crest apply on the base of the numbers. 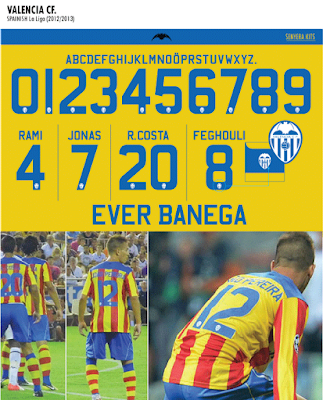 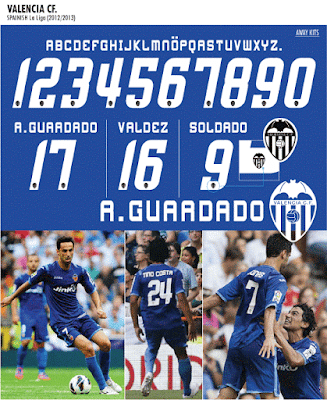 After the presentation of the Valencia home kit 2012/13 and modified Senyera Champions League jersey, Valencia CF, Spanish La Liga team, have also unveiled their way strip. Los Che away shirt is mainly purple with light purple detail around the sleeve ends and collar. Made by Joma,Jinko Solar features as main
sponsor on the front of the ValenciaKits, while MSC has its logo on the left sleeve. 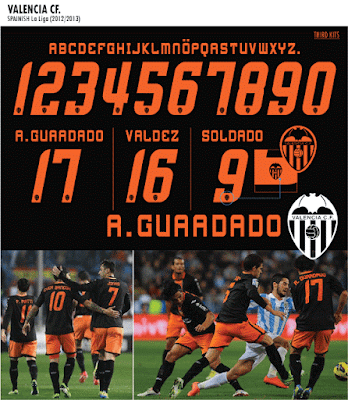 Valencia CF have third strip, black and orange kit, will be first worn against Malaga and will also be used in select Champions League Cup and domestic league games. Additional new design font featured on these both kits (two design font features for the Valencia 2012-13 season kits). The font material PU type